Imagine finding the family history in the front of the book: Hand Book of Domestic Hygiene! 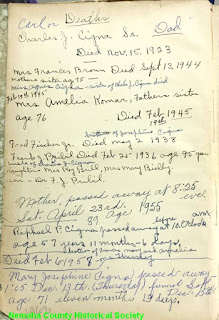 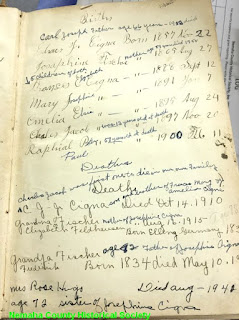 On Tuesday, the Nemaha County Historical Society received a World War I photo for display in its Temple of Honor Military Museum. 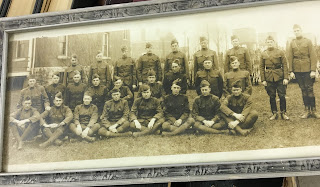 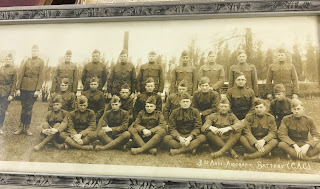 Unfortunately, there was no information about the photo or people in the photo. Thus, the detective work began.

There was one obvious clue on the photo: 3rd Anti-Aircraft Battery (C.A.C.) Even though we had a major clue, we still weren't coming up with much information. Thus, the picture was posted on the closed Facebook group: Genealogy, Just Ask for additional help.

In the meantime, it was determined that  the C.A.C. stood for Coast Artillery Corps. This led to the site: Defeating the Hun: History of the United States Army Coast Artillery Corps During World War One. The author, Joe Hartwell, has compiled a wealth of information on this Ancestry Freepage. The downside, was the lack of any information about this particular unit: 3rd Anti-Aircraft Battery. After an email to the author, we were able to visit with him about this unit. Unfortunately, Joe didn't have any information on this particular unit and believed they were never deployed overseas. He said they likely came from all over the United States and that a muster roll probably did not exist.

A second site was found with information about the Coastal Artillery Corps on the World War I Vets site.

Facebook Genealogists also came thru with more information about the picture:

Thanks to everyone who helped identify the group in the picture!

We would still love to know who is in the picture!

Today, we found a clipping in an old book. The clipping is from an unknown paper outlining the county officers. Please help us identify the location and time period for this clipping.

County Officers
City Officers
The back of the clipping has information regarding a Presbyterian Church service and an advertisement for a bank in Kansas. It looks like the bank's name could be Citizens Bank. 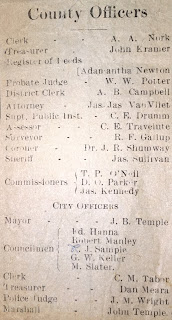