We've all likely heard the term, 'bills due' but have you heard of 'due bills'. As we were going thru boxes to verify what items were in storage in the basement of the military museum, we came across some due bills. 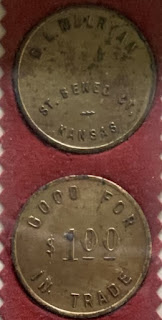 These look like coins, but not the coins we are use today.

A search of the Seneca newspapers for "due bills" turned up the article "Helping the Town" in the 29 August 1907 issue of the Corning Gazette that helps explain the use of these 'coins'.

"Each town that has any considerable patronage from the farming community surrounding it, should have a small cold storage plant. one plan that has been found practicable in many towns is the organization of a produce company in which merchants of the town as well as the farmers are stockholders. These concerns provide every facility for the proper packing and storage of eggs and butter and other perishable produce, and sometimes include a butter renovating plant. Where such companies are operated the merchants refuse to handle produce, referring all who have such to sell to the produce company. The company pays the highest market price for what it buys. Instead of paying cash, due bills are issued which are accepted the same as cash at all the stores in town. Each week the merchants who receive these due bills in exchange for goods have them cashed at the office of the produce company.

The following ad for the sale of hats by Hattie Wright indicates that she was willing to accept due bills in trade for her merchandise.

A short article in the "Nemaha County News" section of the 20 Dec 1917 issue of the Courier Democrat explains why these 'due bills' disappeared from use.
"Another very bad feature about the system merchants use is the "tin money" due bills they use. This is a form of money similar to the old wildcat money. You take produce to the merchant and he pays this script. If he goes broke, you lose that much as it is not even any account. It would be hard to get into bankruptcy court with it. A farmer showed me $25 worth of this "tin money" on a local merchant who busted."
Come help the  Nemaha County Historical Society's carry out its mission to collect, preserve and share the history of Nemaha county, Kansas by participating in our events, visiting the museums, donating items of historical interest or providing financial support.
at July 26, 2021 No comments: