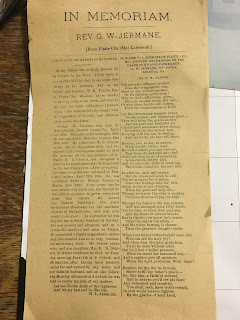 A Tribute to the Memory of My Father


As my father was so little know by my friends in the West, I took upon it as a matter of filial duty to say some few things to his memory. And, as my friend and brother, W. M. Paxton, Esq. of Platte City Missouri, has so kindly written in verse of his death, and thereby has laid me under obligations I cannot repay. I the more cheerfully comply with the suggestion of friends, and affectionately notice his death.

George W. Jermane was born in Honeybrook, Chester county Pa. April 1st, 1804. He came to Philadelphia 1825. He was married to Rebecca Lindsay Dec 25th, 1827. He joined the M. E. Church on the 22d of September 1822, and remained in its communion until he died. He was one of the incorporators of St. Paul's M. E. Church and occupied a place in its pulpit when able to be present for the last 30 or 40 years. After preaching for some years he was ordained to Deacon's orders April 27th 1845. He was ordained Elder by Bishop Jaynes on March 28th 1852. Four years ago he was attacked by paralysis, and though he was able to go about he never recovered from that stroke. He served his Church faithfully. or years he  acted as Missionary for the southern district of Philadelphia, and was ever ready to do good. As a preacher he was beyond the ordinary standard of his day. He was earnest and eloquent, and as a result did much to lead men to Christ. He possessed a highly sympathetic nature and this enabled him to do very successful missionary work. He leaves three sons, and one daughter, Mrs. E. R. Branson, at whose residence he died on Tuesday morning June 14th at 9 o'clock and 25 minutes, after having been tenderly cared or and nursed by my sister and her faithful husband, and on the following Monday afternoon at 2 o'clock he was laid to rest by the side of my mother.
Let me die the death of the righteous
And let my last end be like his.
W. L. Jermane